Irrespective of the duel between Tacha and Mercy earlier today, Big Brother Naija housemate, Mike still seems to be on the spotlight as award-winning actress and producer of ‘Jenifa’s diary’ Funke Akindele has taken to her twitter to commend him for his gentility.

Recall that Mike recently had an argument with Tacha, and during the course of the argument, Tacha rained insults on him and pushed him aside, an action which could have caused a negative reaction from Mike.

Rather than attacking Tacha for her misdemeanor, Mike chose to ignore the ranting housemate, a decision which portrayed the nature of a true gentle man.

His wife had also commended him for the manner which he handled the situation.

Life is a teacher and there are people that will always test you just to get the reaction they’re looking for. Thing is it’s how you react that shows true CHARACTER & what makes you the BIGGER person.

In my husband’s defense which I had no doubts about, he handled himself well with composure as always because he was raised to be a true gentleman!’

His mother’s goodwill message to fans and well wishes cannot be left out too. Few days ago, Mike’s mother had also praised her son for being a role model and a great son to her.

Just today, Funke Akindele voiced out her opinion on the housemate via her twitter platform, calling him the definition of a true gentleman and also revealing that she’s learning alot from him. 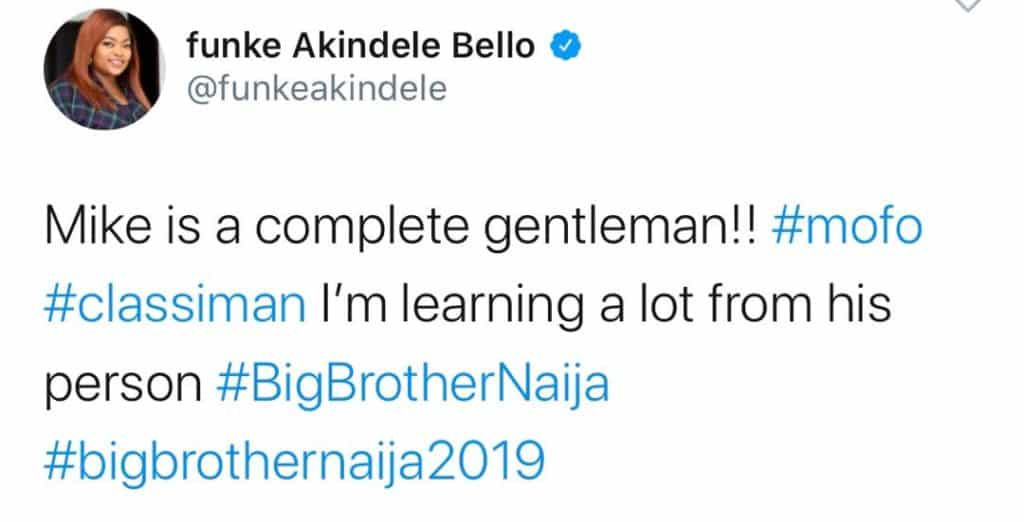 Kizz Daniel Fires Back At G-Worldwide (Read What He Said)